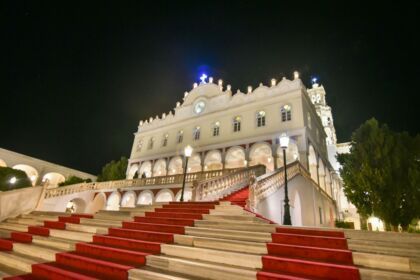 How the miraculous Icon was discovered

A lot of things have been said about the Icon of the Annunciation of Virgin Mary. The discovery of the Icon was considered a divine omen for the Turkish occupation. Since the discovery, many miracles as well as works started happen. One of them was the Holy Church of Panagia Evaggelistria of Tinos, where the Icon is kept until today. On the Icon Archangel Gabriel is offering a lily – symbol of purity and grace- announcing that she would conceive a child to be born the son of God. 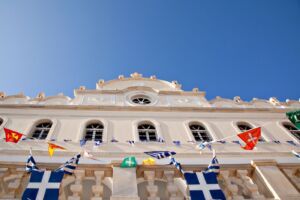 Two years before its discovery, Virgin  Mary gave the first manifestation of her purposes. It was in 1821 when Tinian Michalis Polyzois was led by Her to the field of Antonios Doxaras to dig for and find her icon. Polyzois  and some friends went there but their efforts remained fruitless as the only thing they found was a part of a Roman fortress. Disappointed as they were they left the place. This time it was Ioannis Giouzes’ turn from Mountado village , owner of the field next to Doxaras’ field, to claim that hundreds of faithful, coming from all over the world, were going to pay their respects to that part of land.

Pelagia’s real name was Loukia Negreponti. Her father was a priest and her mother came from Fragouli’s family in Tripotamos village. From her early age Pelagia was very faithful, fasting and praying consistently. It was on July 9, 1822 when she was granted the Supreme Blessing of seeing Virgin Mary in her monastic cell , who indicated her, Doxaras’field in order to unearth the buried Icon and ask Bishop Kangadis to start excavations. As she thought her vision wasn’t a divine plan, she did nothing in response. The following Sunday , 16th of the same month, Virgin Mary appeared again, but Pelagia is still in doubt if she’s the chosen one. On Sunday, July 23, Pelagia saw the same vision for the third time and decided to publicize her vision.

According to the tradition, Pelagia said to three different people what she had seen , Melanthia Paraskeva, mother Superior of the convent of Virgin Mary, Stamatelos Kangadis and  Bishop Gabriel. Bishop Gabriel remembered that another local man, Polyzois, had spoken about the same vision regarding the discovery of the Icon in that same field, announced to the local authorities and the people of Tinos the beginning of the excavations. 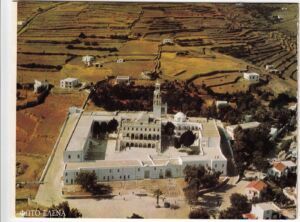 It was September 1822, when they discovered the remnants of two different temples: the ancient Church of Virgin Mary and another one dedicated to saint John the Baptist. However, no trace of the Icon was found , so people gradually abandoned the endeavor.

After the excavations had stopped, Cholera epidemic struck the island. Bishop’s wife and sister were very sick and that serious situation led bishop to recall Pelagia’s words. He believed that Cholera was a kind of punishment from God. In November 25, 1822 works started again with greater organization, in order to build a church in just a few weeks, but the Icon hadn’t been discovered yet.

The discovery of the icon

On January 30, 1823 a volunteer worker’s pickaxe  struck the miraculous Icon, splitting it in two with the Archangel on the one side, holding in his left hand a Lily, the symbolic flower of purity, and Virgin Mary on the other. The backside of the Icon was burnt but faces appeared  to be unharmed. The Icon was given to Bishop Gabriel  with piety. The miracle was completed.

The construction of the Church

Immediately after the discovery, the building of the church was decided. It required great quantities of marble, which were mainly transported from the neighboring island Delos. The width of the church was 19.75 m and itslength was 12.1 m. The construction of the church was a miracle too. Whenever difficulties were faced, all problems were resolved with generous contributions both of time and money, till construction was completed. The church of Panagia Megalochari is a magnificent work of architecture to the present day. 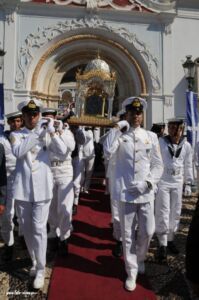 On the ground floor of the temple, there is the church of the Discovery of the Miraculous Icon, while on the first floor we can see the church of the Annunciation. Three vaulted covered parallel arcades comprise the lower church. The arcades communicate with each other via arched openings in the intermediary walls. In the first arcade the Holy Water is kept, while the two other arcades are mainly used for baptisms.

The Church of the Annunciation

The Church of the Annunciation of Virgin Mary is a three aisled Basilica. It is constructed by Efstratios Kolonaris, famous architect born in Smyrna, who lived in Tinos. In 1825 Francisco Kanahilis created a wooden base which supports the miraculous icon and he decorated it with gold leaves.

The Bell Tower of the Church stands dominant, imposing and protective. It was constructed by Ioannis Filippotis, from the village of Pyrgos of Tinos, while it’s design was undertaken by the architect and academic Anastasios Orlandos.

The Museums of the Complex

The founders of the Church had collected archaeological treasures back from the early days of the existence of the Complex. Under the umbrella of the National Institute of Sacred Evangelistria there are five museums.

1.Museum of Icons and Relics

It is located in the ground floor since 1971. It includes old icons collected from parish churches of Tinos according to the traditional way of Tinian drawing. Special reference should be made to the first replica of the icon of Her Grace, which is kept here.

Since 1996, it includes a library as well as unique sacred objects mainly used for the Divine Liturgy.

It includes many works of art by Greek and foreign painters. The collection was a donation by Athanasios Papadopoulos in 1961, as there were some of his own works in the gallery. 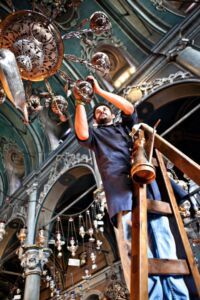 It was established in 1930 and it contains sculptures made by the most important the Tinian sculptors. Every year the collection is enriched with works donated by their creators, having today and wide collection of the new Greek sculpture.

In that museum there is a special exhibition of the works of Polytechnic University professor and academician Antonios Sohos.He was born in Ysternia, Tinos and his collection includes 16 sculptures in wood, plaster, clay and marble.

Since the first time that Virgin Mary appeared to Polyzois and Pelagia till today, faithful people all over the world experience miracles in their every day lives and that’s the reason why they visit the Icon of Virgin Mary and kneel before it with respect and faith. Hundreds of faithful, suffering from a disease, invoke Virgin Mary to help them recover. Being thankful for Her help they promise to offer to Virgin Mary a present. And she helps them most of the times.
We can see the product of dedications ,made by the faithful, play a leading role in the church and they’re either extremely expensive items and collectible golden objects or simple personal jewelleries. One of the most impressive offerings is a fountain, made of marble, next to the stairs leading to the church. It’s a present from the Turkish Mustafa Aga Kioutakirtzi who served in Crete. Being paralyzed and encouraged by his Greek doctor he visited and watched the Divine Liturgy. He begged Virgin Mary for healing and he finally recovered as a blessing from her. 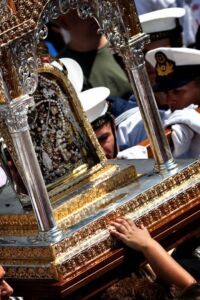 Throughout its history the Church’s vaulted ceilings have resounded with the heartbreak of Greece. The history of the Icon is very closely connected with the rebirth of the nation after the Turkish occupation. It’s no accident besides, that the celebration of the Annunciation of Virgin Mary coincides with the celebration of the deliberation of the Turkish occupation in 1821.
To this day the founders of the Holy Foundation envision a free country with citizens that live and prosper there. That’s why the activities of the Foundation contain many different categories. The foundation “hugs” and supports refugees, old-aged people, education, health and culture. It also contributes to the organization of scientific congresses, speeches, educational workshops and exhibitions. All these arrangements aim to improve people’s faith and social contribution.
A journey of faith and mutual assistance keeps going on from 1823 to these days! 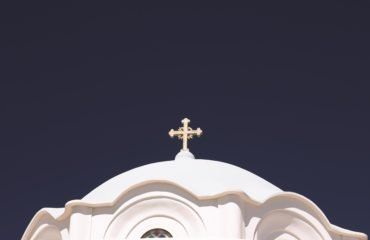