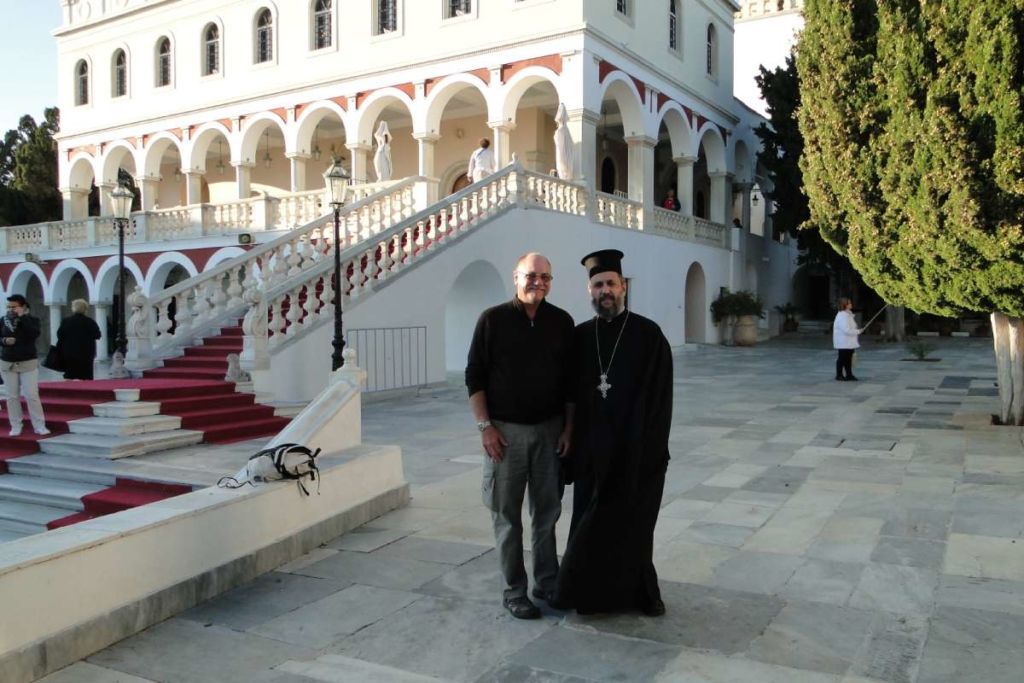 Food- The most delicious excuse to get together with friends

He travels very often all over the world. He cooks professionally. He could manage a hotel or a restaurant. He can teach history, writing, culinary arts and theater. He can be a successful businessman in a large company, but instead he prefers to observe, interact and live close to different cultures. This is Marc d’Entremont, whose reputation as a food and cultural writer is internationally respected. We suggest you to visit his site, www.travelpenandpalate.com where you will find his unique articles and links to other publications as a contributing writer. Since 2014, Marc has a monthly travel article in both digital and print editions of the Hellenic News of America (www.hellenicnews.com). As Greeks, we are blessed, because Marc is in love with our country and that makes him visit Greece very often. Recently the island of Tinos caught his “sharp” eye, so we had an extra reason to find him and learn more about him and his career. 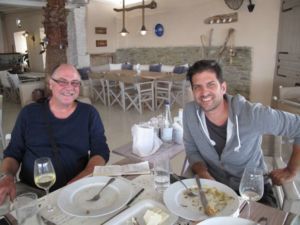 Dear Marc we are very happy that tinos-about hosts your interview. First of all, do you want to share with us some personal information? Where were you born and what did you study?

I was born in a suburb of Philadelphia, Pennsylvania.
Regarding my studies, during university I studied history, theater and writing, and it was also in those years that a teenage love of cooking developed into the realization that food (its history and origins) has always impacted life from festivals to wars.

How early in your life did you discover that Greece was a place that attracts you  and why?

Ever since a boy being read Aesop’s Fables the Greeks sounded smart. It didn’t take too many years to realize there was something very special – architecture, myths, history and antiquities. Growing up with an architect father and artist mother gave me early exposer to this world through museums and literature. In secondary school I was introduced to Greek humanism and the classical writers. 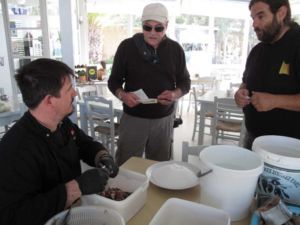 Let us know about your decision to become a chef.
The cuisine of the Eastern Mediterranean Ancient World became a significant focus when after 8 years of teaching I made the transition becoming a chef – I am a member of the American Culinary Federation. I was living in Puerto Rico then and one food critic dubbed me the “Phyllo King of Puerto Rico” (San Juan Star 1981) since I made so many dishes and appetizers using that dough.

Your career after that, was a success story. Would you like to share with us the most important steps of those years as a professional chef?

Moving back to the USA I managed a restaurant, serving as their Executive Chef and also taught creative writing until I was offered the opportunity to combine all my talents. In 1992 I was hired by the State of Pennsylvania to transform a struggling culinary arts program in a large public vocational high school catering mostly to at risk teenagers – learning disabilities, legal issues, drugs, etc.
Within 3 years the Center for Arts and Technology – Pickering Campus’ new Cat’s Eye Culinary Arts program had expanded greatly with upgraded facilities, an increasing staff – additional teacher, teaching assistant and 4 other staff members – a restaurant, catering business and providing all food service for the 500 student high school. We returned thousands of dollars a year in profits to the school. In 2003 we became the first high school in Pennsylvania to receive national certification in culinary arts from the American Culinary Federation. 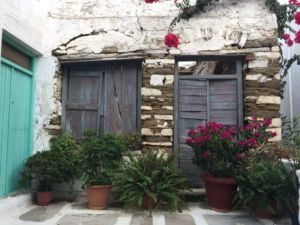 Thus not so suddenly, the culinary and the culture become an every day passion for you. In what ways do you express that passion?

It was during that period as well that I developed my culinary/cultural writing style. Not only did I have to create a culinary curriculum for a unique and diverse group of students, but many had not traveled outside Pennsylvania. I began writing articles about foods, origins, historical uses and impact on local life that was included in the curriculum.

I remained Head Teacher and Food Service Manager for 17 years until retirement in 2009 – “retirement” that is from that job. I had already made plans to the transition to a full time food and cultural travel writer. I created Travel with Pen and Palate and returned to Argentina for 5 months creating my digital guide on the country. (http://www.travel-with-pen-and-palate-argentina.com/) 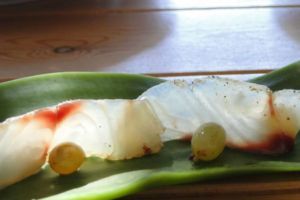 We said before about your “love” for our county. But when was the first time that you visit Greece?

It was in 2013 that I was invited to Greece. Sofia Bournatzi of Pass Partout Marketing, Thessaloniki, arranged my first trip: Halkidiki and Thessaloniki. I attracted two additional marketing companies – MTC Group and Re Make Consulting  plus private companies – that arrange trips for me as well to regions they represent. Five separate journeys to Greece encompassing nearly 6 months of travel have taken me from Mt. Olympus to Mt. Athos; Lipsi Island to Mykonos; Athens to Metsovo and Thessaloniki to World War I graveyards in Kilkis.

How interesting is to write about Greece? Do you collect your information easily? Do you enjoy the whole procedure?

It’s easy to write about Greece. Everyone is willing to talk with me. Everyone wants me to eat (too much!) food. From having lunch with a multi generational family in their old raki house, a Greek kosher dinner in Thessaloniki to interviewing Giorgos Amoiralis of Tinos Food Paths, Greeks express an extraordinary connection between what’s important to the social fabric and food – from growing, to marketing, to preparation to celebrating to finally eating. In a very real sense it is the cycle of life. 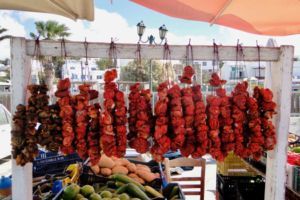 Do you want to share with us in brief your first time visiting the island of Tinos?
As a travel writer you go where you’re told – that is graciously invited. I’m fortunate to have trips planned by several excellent Greek marketing companies, which among them represent much of the country. Elina Gioti of the MTCgroup, Athens, facilitated arrangements with the municipality, and the knowledgeable, energetic and fun tourism volunteer Adriana Flores Bórquez served as my personal guide.
I was told by a few people (not islanders!) prior to my visit, “You can see Tinos in 30 minutes.” Obviously they had never visited Tinos. Even after four days with Adriana and a packed itinerary I felt I had only gathered postcards, yet those images and the people I met only made me aware of how much more there was to discover.

Do you appreciate Tinos? Which word describes best your view on the island?
Tinos has depth: in the creativity of its people, in its natural beauty and its complex culinary culture. Gaining a “little” knowledge only fuels a craving for more of Tinos. 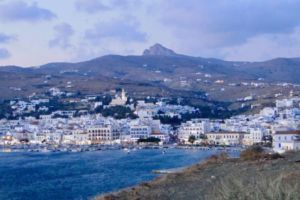 If Tinos was an international gourmet dish, what would it be? What flavor would it have?
Smoked White Grouper !Among all the creative dishes I ate, this Smoked White Grouper represents Tinos culinary culture: complexity and simplicity.
Curing and smoking are traditional preservation methods that enhance the natural flavors of foods from the sea and the land with its own subtle aromas. 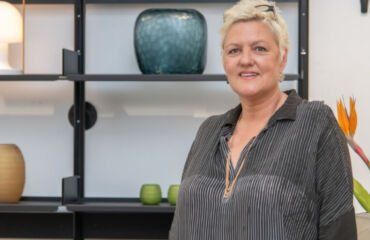 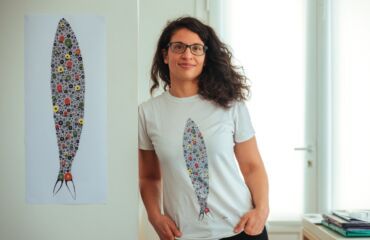 Katerina Roussounelou: Looking to the light…