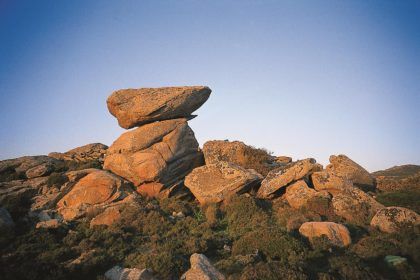 “Pano Meria” is the medieval architecture side of the island.

Pano Meria is the place where the landscape changes and the sights of the Middle Ages are still very obvious, surrounded by green creeks and steep slopes.

The route to “Pano Meria” begins at Ktikado village. The first impression of the village is the catholic church of “Timios Stavros” (Holy Cross) with the exquisite bell tower. It is said that it’s one of the oldest all across the island, as it dominates here since the 17th century. Walking along the neat settlement, you will encounter whitewashed traditional houses, with marble lintels and sculptural ornaments, typical Tinian arches, the old fountain on the square and the orthodox church of Megalomata (or Ypapanti) with the marvelous marble entrance. 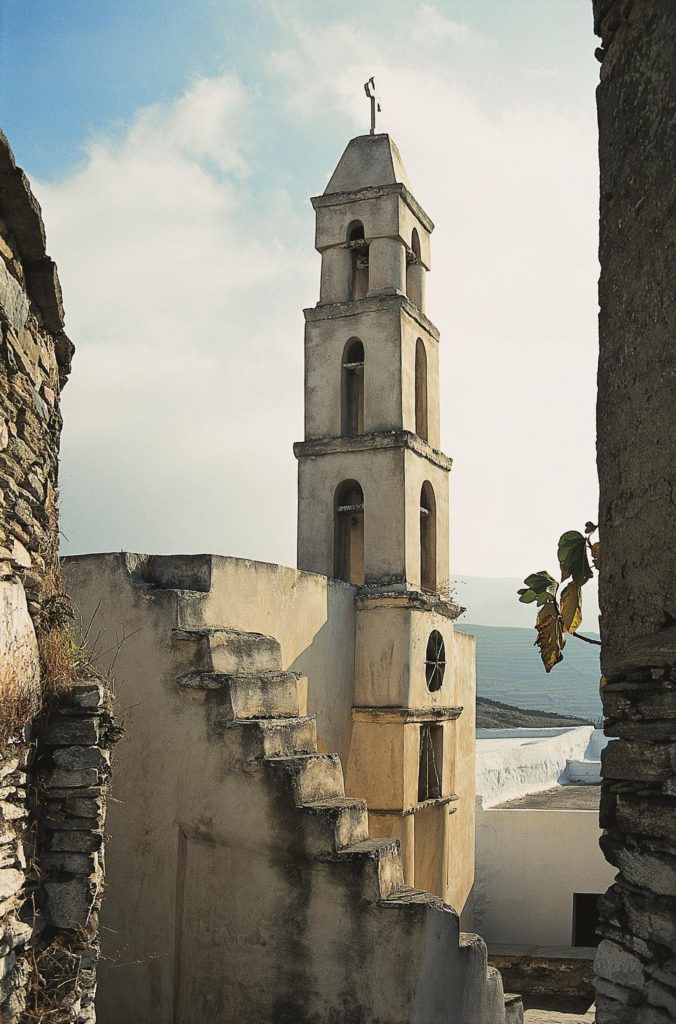 Located in a small distance from Ktikako, Chatzirados stands out for its picturesque beauty and its magnificent view to the sea. White houses with colourful flowery yards, paved alleys, a traditional coffee shop and the old church of the “Holy Trinity”, which dates back to the 15th century, reveal the grandeur of simplicity.

We walk along the foot of Exambourgo. Among three rivers, you will feel like going back to medieval ages. Tripotamos will enchant you with its arches, steps and dark arcades. In the village you can find the cheese-dairy of the island, where the traditional cheese of Tinos is produced. You’ll also find some pottery workshops. Sperados is a small adjoining settlement to Tripotamos with nice houses and the old path.

Next station is Karya. Although it is now underpopulated, back during Venetian domination, it was an important village and later the wealthy citizens of Khora made it into their favourite place for their country houses. A leafy village with old mansions and a beautiful square, where you can enjoy the traditional greek coffee. You will also come across a unique protected municipal parkland. Regarding to the cultural map of Karya, the village a museum of folk art and an active cultural association of the community, which organises interesting cultural events.

Built on the hillside of Kechrovouni, you will encounter the tiny village Tzados. Go up to its highest point and visit the church of “Aghia Anna”. Don’t miss the fountain with the old washers.

On your route you will find Mountados. The totally green settlement, which is officially referred to be traditional, counts already a thousand years of a “lifetime”. On the altitude of 300m, many wise men and Philosophers’ homeland, takes pleasure of the reputation of the place that has given prominence to the people that have shined in arts and education. In proof of that, it is mentioned that it’s one of the quite few villages where there was a school until the mid 19th century. Nowadays, Mountados represents the very best of the traditional Cycladic architecture, with the archways and domes, paved narrow step-ways, traditional houses of Tinos, the stone-built bridge and the church of Aghios Ioannis (1871).

Our next stop is Triantaros, called “the balcony of Tinos” which is built amphiteatrically on the slope of Kechrovouni, has a marvelous view to Aghios Fokas from an altitude of 500m. As homeland of many famous stone craftsmen, it is full of traditional houses, innumerable arches and narrow alleys. Among the architectural ornaments, the church of the Holy Apostles as well as the traditional oil mill in Lefkes are included. The beauties of Triantaros had such a magical effect on foreigners that they decided to live permanently here.

In spite of its tiny size, our next village Berdemiaros, offers a magnificent view to Naxos, Paros, Syros, Delos and Mykonos. The “closeted” church of “Zoodochos Pigi” that boasts about its bell tower and the vivid fresco painting inside is worth a visit.

Dyo Choria are the settlements once separated by a little river, which later formed a beautiful village. The signs of Middle Ages are obvious here, too. Situated at an altitude of 450m above sea level, it is considered another “balcony of Tinos”. Thanks to its location on a green and fertile hillside, there are many natural resources, the so-called “xynaria”, as well as a centenarian plane tree standing on its big square.

Arnados situated at an altitude of 450m, too, is the purely mountainous village of Tinos. Medieval arcades, traditional buildings, the fountain on the upper square and the churches of Ascension and Aghioi Anargiroi are the reasons why this village is worth a visit. Discover Panaidaki, hidden in an arcade. According to the legend, there used to be a secret school bellow that Ecclesiastical and Agricultural Museums are extra reasons to visit Arnados. The Monastery of Kerchrovouni is very close to the village.

Kechros is next. This village was well known in the past for its “statourades”, which means saddle makers. The gorgeous church of Panagia Myrtidiotissa is a must-see of the area.

We are already in the middle of the island, “Mesi” for the locals. This place is also called Pentostrato, the cross point of roads leading to all 4 destinations. At the entrance of the village one meets the parish, the church of the Archangels as well as the Monastery of St Francis. Don’t miss the Folklore Museum of Agricultural Tools.

Falatados is the next village. It’s an old village dating from 1400. Dimitris Vlassis’ homeland, the worker who was the first to face the miraculous icon of Panaghia in 1823. In the village there is the old aqueduct, the so-called “Paliomantra” (it was built between 1750 and 1850). Here you will also find the houses of Sketch, the first sketch museum in the greater region of the Southeast Mediterranean, founded by the Mitropoulos Brothers. If you come in September, a period of many feasts on the occasion of raki production, don’t miss “Rakizio”, the great local festival.

One of the biggest villages in Tinos, is Steni. Built at the foot of the highest mountain on Tinos island. Tsiknias is a very “living” place throughout the year, with many taverns and cafeterias. You can visit the carpet making school and the folklore museum during summer during summer months. Wandering along the paved alleys, don’t miss the orthodox church of Aghios Antonios and the catholic one of Aghios Nikolaos.

Known to the locals as Mouslou, Myrsini is situated to the summit of Tsiknias, considered the residence of Aeolos. It’s an old settlement, ideal for those who love climbing or who want to admire its rare natural beauty. The three-aisled church of Evangelistria is magnificent with an excellent architectural layout.

Potamia is an unexpectedly full of green village in a cycladic island. An isolated village, between ravines with running waters, that once powered the water mills of the area. It is built among three ravines of Tsiknias and the first to be seen by the morning sun. in the center of the village you will find the church of Panaghia Karmelitana.

Fero is a tiny settlement with only a few inhabitants. Those, who have chosen to live in this isolated ravine in the eastern part of Tinos, have the chance to gaze for hours across Mykonos island and Ikarian Sea.

Our route to Pano Meria reaches to an end with Aghia Varvara village. It is named after the temple of Aghia Varvara. The most recently established settlement, right before Aghios Sostis beach, maybe the tiniest of the villages, but it already has its place in the touristic map of the island, as you can find here several restaurants and rooms to let. 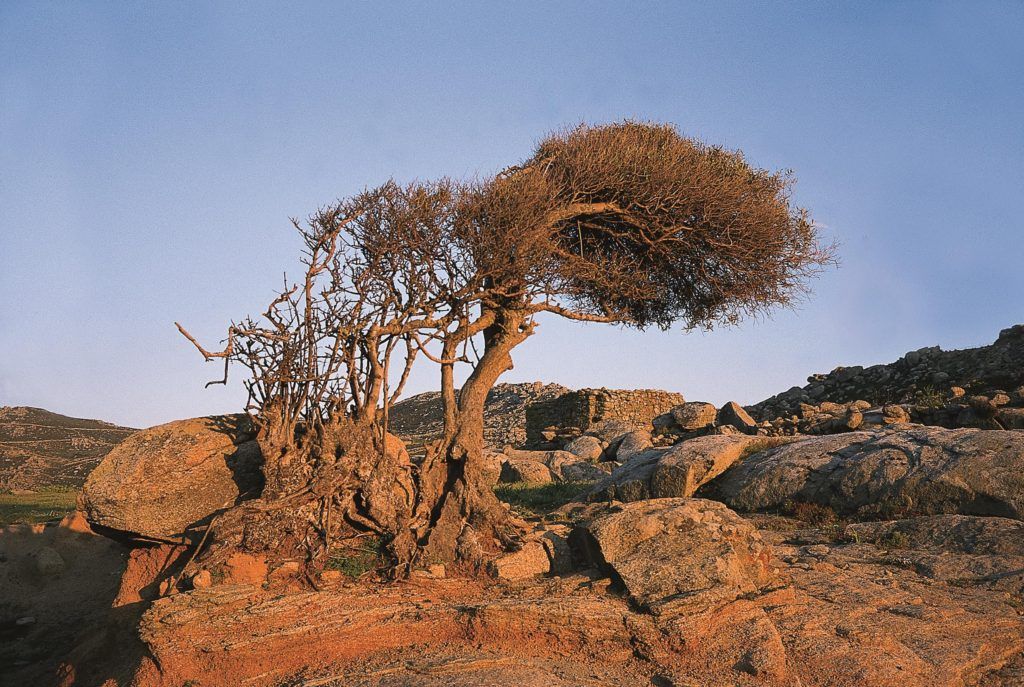 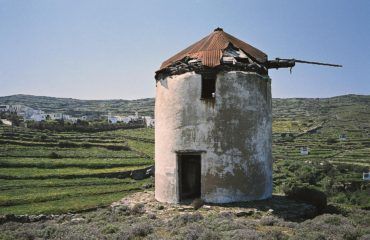 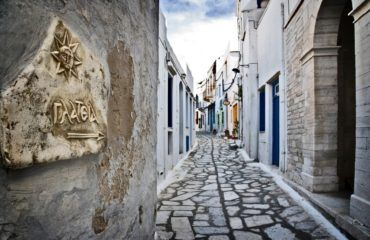 Exo Meria – The cradle of arts