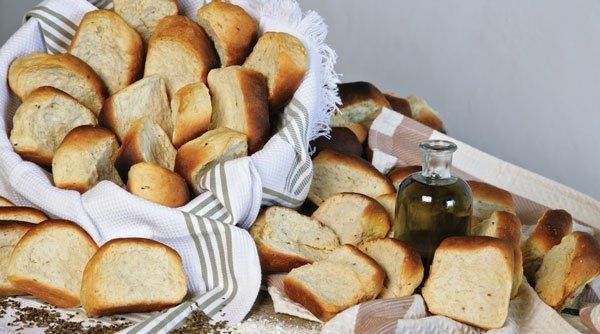 PREPARATION
For the leaven: dissolve the yeast in a glass of tepid water and add flour until a thick batter is formed. Let it leaven. Place the flour and the leaven in a basin and make a hole in the middle. Throw the oil and the anise. Put hot water in a pot. Throw the sugar and the salt in the water and stir. Pour slowly the content of pot into the basin and knead until you have a fluffy dough that doesn’t stick. Cover the basin with a towel and a light cloth and keep it in a warm place for about 2 hours.When it has leavened, take gradually the dough and give the shape of a 2cm spade. Cut it around every 8-10cm.Place the pieces one next to the other in an oily baking pan. Cover them again for 1.5 hour to leaven. Then, bake them in preheated oven for 40 minutes at 200°C, until they get brown. Once baked, let them cold and set them apart carefully. Next, place them again in the baking pan sideways in concentric circles. Put them in the oven for 5 hours at 100°C in order to dry and become rusks. They are preserved for a long time in airtight boxes

Special thanks to ms. Nikoletta Delatola-Foskolou for the tasteful recipes 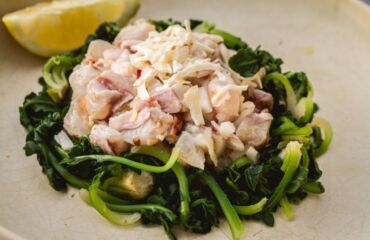 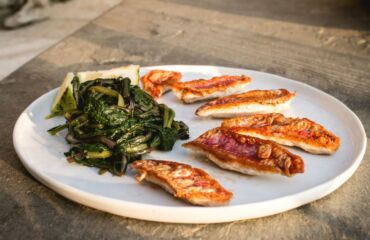 Fillet of roasted red mullet in the pan with greens 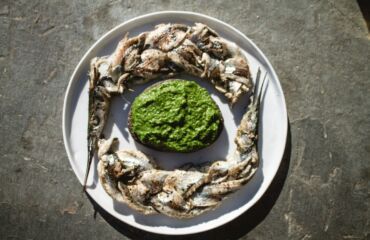