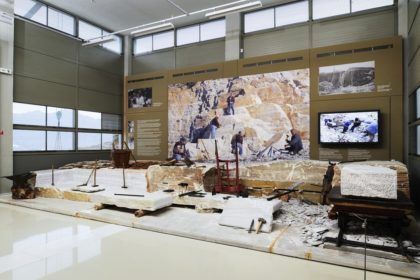 Museum of Marble Crafts of Tinos: An institution that enhances culture

The Museum of Marble Crafts in Pyrgos, Tinos balances between the technological and historical framework, with the island always being the principal point of reference. Deductions in space and time connect local tradition to the overall Greek world, expressing the timelessness of techniques, from the ancient times to the present.

The Museum presents the technology of marble, which has been a significant feature in the art and architecture of Greece from Antiquity up to the present and describes in detail the interconnection between tools and techniques used for marble working. In parallel, by placing an emphasis on preindustrial and proto-industrial Tinos, which was the most important center of marble crafts in modern Greece, it enhances the social and economic context in which the local workshops developed. However, even nowadays, marble contributes to the boosting of the island; as Mr. Andreas Lapourtas, Manager of the Museum of Marble Crafts and executive member of the Museum Service in Piraeus Bank Group Cultural Foundation (PIOP) points out:

The financial boosting of the island, tourism-related included, is now apparent to all of us. After eight years of operation, the Museum is established as one of the top destinations of the island, in spite of its remote location. The number of visitors is constantly increasing. Also, we should not forget that the staff comes from the active workforce of Tinos, while the same stands for the majority of the partners. Additionally, all actions carried out in the Museum, along with the continuous participation in Greek or international celebrations, create institutions which enhance culture and broaden the horizons of Tinos. Consequently, the Museum not only is an ark of Tinian marble crafts, but also a vehicle that promotes the cultural heritage of the island in Greece and abroad.

The permanent exhibition includes diverse original works in marble for secular, ecclesiastical, funerary and everyday use (lintels, fountains, coats of arms, cantilevers, icon-stands, mortars, etc.), clay models and plaster casts, tools for quarrying and for carving marble, machinery, archival material, as well as Greece’s richest collection of drawings by past marble-carvers. This considerable number of authentic objects was gathered together mainly thanks to public awareness, both of individuals and agencies that have donated or lent them to the Foundation. Furthermore, in conjunction with the interrelated reconstructions of a quarry, a marble-carving workshop and the assembling of an Episcopal throne, visitors have the opportunity of observing traditional techniques and processes of extracting, squaring and transporting marble blocks, as well as of creating and installing a construction; in other words, the entire course from the raw material to the finished product.

Tinians seem to have embraced and support the Museum operation. According to Ms. Nantia Grintzali, local administrator of the Museum: The locals think that the Museum is part of their daily life and prove it through their repetitive visits, participation in events and their continuous contribution to the enhancement of the collections. We feel that their love is a given and this is our greatest satisfaction.

It is a fact that the PIOP supports all actions, Museum or not-related, which deal with the general artistic activity of the island. The synergy with local bodies as well as the educational community is of major importance aiming at the co-organization of events and actions. Last year, the Primary School of Pyrgos came first – in national level – with the short film ‘in the tracks of our school’ making everyone proud while it showed all existing potentials. At the same time, we listen, evaluate and support the needs of local society which are not strictly related to the Museum. I will just mention in brief two examples: the Museum of Marble Crafts’ Friends Orchestra which over the past three years and under the guidance of Giorgos Koumentakis, joins and gives prominence to the rich musical forces of the island and secondly, the several member group of traditional dances. The commitment and excitement of those participating, the fine result and the great impact of these initiatives are what make us carrying on the effort, Mr. Lapourtas highlights.

On the same matter, the local administrator, Mr. Yannis Michail enlightens us: Cooperation is the key. Relations of mutual trust, joint actions and support have been formed with several local bodies. A greater sensibility is noticed, perhaps due to localization. Several actions are supported by the PIOP such as the Museum of Marble Crafts’ Friends Orchestra or the group of traditional dances. In this way, the foundation contributes- among other things – to social coherence in difficult times.

The marble holds a special place in Greek art and architecture. A stone that scintillates (Greek verb marmarizo) in the sunlight, its use as a raw material began here in the Cycladic islands with the well-known figurines and vessels of the third millennium BC. Thanks to its particular properties, that is, its weight, mass, resilience, glossiness and durability, it became the monumental material par excellence for works of art, from ancient Greek architecture and sculpture to Byzantine decorative reliefs, and from folk marble carving to Neoclassicism and the sculptors of the last two centuries.

The greatest of all the Neohellenic centers of marble working was Tinos, and specifically Exo Meria, an area whose soil is barren but rich in marble (white, grey, green), where there are numerous quarries. Here the craft was passed on from father to son, and a multitude of talented marble-carvers emerged as it evolved over the years, as well as eponymous artists whose chisel left its indelible mark all over Greece, as well as in Asia Minor, Constantinople, Romania, southern Russia and Egypt. Marble sculpture is an integral part of Tinian culture and tradition. The Museum which is set in Pyrgos, the place where great representors of marble crafts were born and worked, helps to have clear memories of them. Apart from that, the Museum of Marble Crafts ‘embraces’ and presents the work of new artists, by hosting periodic exhibitions in the hall of multiple purposes, Mmes. Magda Dellatola and Katerina Lamera, employees of the museum, emphasize.

The marble craftsmen of Tinos

Workshops were simple and often small in size, depending on the space that the family could make available. They were accommodated in the basements of houses and in street-level shops, while an ancillary building, such as a shelter in the quarry or a windmill, also sufficed, particularly for craftsmen working alone. Quite common was the semi-outdoor workshop, the so-called paraga, which had a timber frame clad with rhododendron twigs. In the larger workshops special care was taken to ensure proper lighting, with large windows, and sufficient space outdoors, where raw blocks and worked pieces of marble were stored.

Before starting work on a commission, the craftsmen select the appropriate material and proceed gradually in carving it. For sculptural decoration they use drawings, stencils and plaster casts as guides. Drawings are used to transfer the design onto the marble, while for three-dimensional sculptures the craftsmen work from plaster models. Initially, the outlines are marked and incised on the marble (simadema). Then the unwanted parts are removed (xevelonisma), the edges are defined and sharpened, and the surface is smoothed (stronetai). The decorative motifs are drawn in pencil or incised directly on the marble, either freehand or with geometry instruments. Stencils (formes) are used to make more accurate repeating patterns. The craftsmen carve either the actual design (intaglio) or the ground (rilievo). The surfaces that are not carved are smoothed by abrasion (tripsimo) and sometimes polished.

Marble-carving workshops are more often than not family-run and there is a strict hierarchy of personnel. In the past, there were three main grades of craftsmen: the owner (afentiko or protomastori), the masters (mastoroi) and the apprentices (paragioi). The masters were journeymen, that is, they were paid a daily wage, while the apprentices learnt the craft without remuneration, except perhaps for a small gift or some pocket money. In an intermediary grade were the masters’ assistants (mastorakia), in the second stageof apprenticeship, who earned a lower wage than the master or were paid by the piece. Additional specializations, rarely professions in their own right, were those of the draftsman (schediastis), the smoother (triftis) and the polisher (loustradoros).

Craftsmen were also organized in teams (companies), which were formed for a particular project and worked at the place of the commission. Οther familiar practices were collaboration between workshops or the sharing out of a work to subcontractors. Individual masters worked occasionally in quarries and workshops, in teams or even alone as itinerant craftsmen, undertaking minor commissions.

The reputation and the status of the master craftsmen within the local community, as well as among their professional peers, were commensurate with the prestige of the workshop. Workshop owners were members of the upper class of society and were frequently active in civic affairs. The master craftsman was a social and professional role model for children, whose pastime from an early age was incising, even with a nail and a stone, the marble paving flags of the streets. Graffiti of this kind can be seen in the museum, and even more so in the village streets.

In the 19th century, marble was the dominant material used for the construction of the new capital as well as other cities, and the marble carvers of Tinos quickly oriented themselves towards this new market. Ιn Athens, Tinians had already been working in the 1830s, they worked in the Penteli quarries and the construction of the Royal Palace. Concurrently, they founded large workshops such as those of the Malakate brothers and their father Petros (‘Hermoglypheion’, Stadiou and Korai streets, circa 1835); of Giannoulis Vidalis or Phytalis and his son Ioannis (circa1840); of the three other Phytalis brothers, Georgios, Lazaros and Markos (‘Andriantopoieion’, Akadimias Street at Zoodochos Pigi, 1858); of Cosmas Apergis and his elder brother Georgios (1860s); and of many others afterwards. Soon enough, there developed in Athens a strong secondary centre of production that functioned in association with that on the island.

The remarkable adaptation of Tinian marble craftsmen to the precision that Neoclassicism demanded and to reading architectural plans can be attributed to their accumulated experience. In Athens and in other Greek cities (Piraeus, Hermoupolis, Patras, Tripolis, Pyrgos in Ileia, Kalamata, Chalkis, Larisa, Messolonghi, Agrinion, Thessaloniki, Kavala, Chios, Samos, Rhodes, etc.) where they settled and worked, Tinian marble craftsmen left their indelible stamp on the Neoclassical mansions, the churches, the cemeteries and the restored ancient monuments. From the ranks of these men and their descendants came great names in Neohellenic sculpture.

*The Museum of Marble Crafts belongs to the Network of thematic Museums of technology of PIOP. For its creation, the Community of Panormos on Tinos ceded to the Foundation the use of the premises. The project of the museum was included in the South Aegean Regional Operational Programme of 2000-2006 and was funded by the Third Community Support Framework and Piraeus Bank.

ACCESS AND VISITOR SERVICES
The Museum is located 26 km northwest of the Chora of Tinos.
Facilities include a parking lot for private cars and buses, a café and a gift shop (during opening hours).
Groups: It is advisable to contact the Museum in advance, in order to obtain better service.
Disabled persons: The Museum premises and the permanent exhibition are accessible to disabled persons, for whom there is no admission fee. It is essential that groups contact the Museum in advance, to make the necessary arrangements.
Photography, filming: Amateur photography and videotaping is permitted. Short marble carving sessions are organized by the Museum upon request. 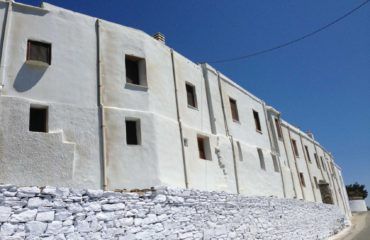 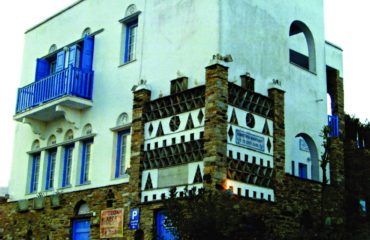