Delos : The resume of the history of a brilliant island… of the enormous open air museum of Delos.

Once upon a time, there was an “invisible” piece of land that was floating on the sea. It used to “sail” without reason underneath the sea until it was hit by Poseidon’s trident and was fast in the Aegean. You see, the great lord of the waves had listened to the entreaties of naughty Jupiter who had knocked up Leto; so, he tied up the wandering rock so as the girl to be delivered from Hera. In this way, from that moment, Delos was revealed (became visible as its name implies) and found its purpose…  It became the shelter of hounded Leto who, under a palm tree, gave birth to her twin babies, Artemis and Apollo, that is to say none other than the light… this is the version of the ancient storyteller regarding the foundation of the sacred island of the antiquity. However, which is the course of Delos in time? 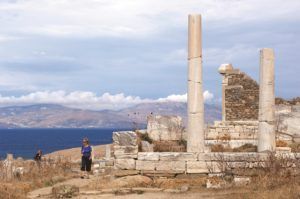 People have called it Ortygia, Cynthia, Asteria but it seems that it preferred the denomination Delos. According to Thucydides, the Karians were the first who lay foot on the island while in the 16th century it was inhabited by the Myceneans and later on the Ionians who had established the island as their religious centre. Apollo’s ancient worship centre knew its greatest prosperity after the Persian wars, when the A’ Alliance of Delos was formatted and decided that the base and treasury of the cities-states should be in Delos. It was then when the island got very wealthy and powerful, something that the Athenians were not fond of. In 454bC, under the pretext of safety during the Peloponnesian war, the Athenians decided to transfer the treasury to Acropolis. Afterwards, the people of Delos who had started to ask for their treasure back, were answered with the “purification” of the island; the Athenians opened the graves and transferred bones and funeral gifts in a group pit (known as Purification Pit) in the neighboring Rhenia. But this was not the end. They forbad all births and deaths at the sacred island while in 422bC exiled all population of Delos.

After about three centuries, in 166bC, the Romanians proclaimed Delos a free port, boosting up the trade and in other words, setting a second prosperous era. Temples, baths, arenas, markets, luxurious residences and laboratories were built in the Apollonian Sanctuary’s valley where lived almost 30.000 people… the beginning of the end came in 88bC when the king of Pontus, Mithridates ravaged the Cycladic island. “Worthy” imitators, the Athenodorus’ pirates had their own raid in 69bC and led Delos to the dark. The golden city of the pillars, mosaics, statues, arenas, ancient theater and bygone wealthy neighborhoods came again to light in 1973, after the excavations of the French Archeological School of Athens. Visit Delos and let the ruins narrate you its brilliant past… 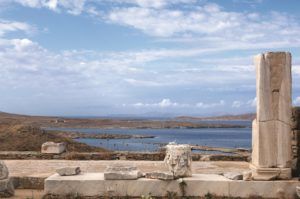 Info
Every Monday the archeological site is closed for the public. 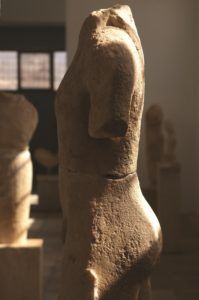