Metal hits on concrete
“He often worked in the dark, on the loft, you could hear only the sound of his hammer on the metal support base…”

Metal hits on concrete is a project about the interior and furniture design of a shop/ a boutique which pre-existed with completely different design, architectural elements materials and atmosphere. The dialogue with my customer brought to life stories with sounds, textures, smells, images and emotions connected with the space when shop owner was her grandfather. Agnes grandfather lived and worked in the same place making and repairing sandals. “He often worked in the dark, on the loft, you could hear only the sound of his hammer on the metal support base. He looked tiny, sitting with his white hair in the middle or towards the right side of the room, surrounded by endless shoes and the only bright spot was the surface he was working on.” This narrative became the idea in a space so small and initially dark, part of the compact historical center of the port of Tinos, with a history of much earlier uses. The floor was covered with cement mortar and the furniture are all made by metal. The hangers are resting on the old roof that pre-existed and had already been covered with MDF from the previous use, where also the lighting is now supporting the new design. The blue color on the staircase wall to the attic tries to deceive our perception about the space, which though quite small acquires a new perspective. Hanging clothes surround the store space while at the same time creating direction in the store, becoming its showcase, its image and identity. 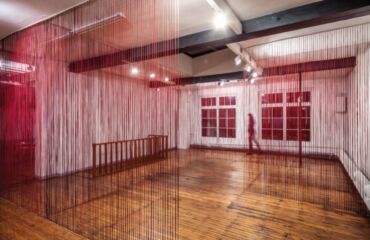 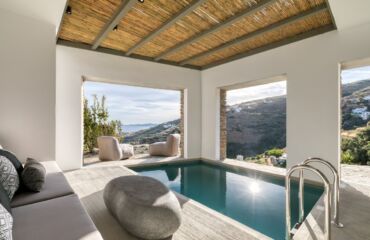 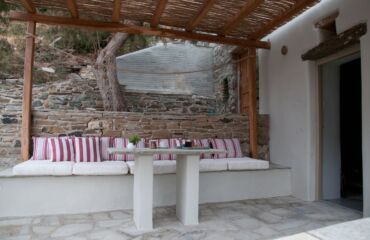