Please configure the element options and add your contact fields.

Greek food at its best

There are times when you hear about studying and a career abroad, Michelin stars, gourmet restaurant management, along with an army of publications and interviews, you think you're dealing with some inaccessible chef who discusses with you with an air of high gastronomy. This stereotype, along with several others, is overturned by the man first and then chef, Giorgos Stylianoudakis. What if he has 36 years of experience in the field of catering. What if his résumé is studying in America, along with the names of one of the best restaurants in the world... He speaks to you, as simple, as authentic, as sweet as the love and art he puts into his creations.

Really, how lucky we are that he decided in 2000 to go back to Greece. And even more so that recently, he was to be enchanted by the island of Tinos, so that we could find him there, along with his fresh new venture. Kalopsia is the name of this restaurant-tavern, and he's determined to show us,through it, the good side of the food.

Based on the Greek taste, the dishes he serves in his place have a Greek character, they look very simple and accessible to the customer, even though they hide top-end techniques

behind them. Yes, in Kalopsia you'll eat octopus, cuttlefish or eel, but it'll never be a simple dish. He will combine a range of techniques, relying on traditional, local products, which his experience transforms into a mum’s comfort food, while culinary reviews will be able to write pages about them. You see George Stylianoudakis, being a Cretan, honors his client but first of all honors the place that hosts him. With respect, he started in 2016 in Kenzo in Mykonos and with the same respect, he continues this season in Tinos. 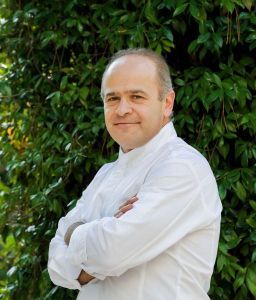 That's why on the menu you will find local products such as the fantastic artichoke or the special local cheeses, fresh fish that the fisherman brings daily to his door, along with a series of imaginative combinations in flavors and aromas. Yes, in Kalopsia you will eat Cretan stew, rabbit stew, dentex fricassé, Tinian goat, moussaka with artichokes, cool watermelon salad or traditional cacavia, all, traditionally modern and attentive to perfectness, served in a simple, ancient Greek boho environment. We're sure whoever goes to Tinos, he goes back. Since this year, he's got a very good reason to do so again and again. Kalopsia, Greek cuisine at its best!